I came out with a word – FANTASTIC to describe this trip. My caretakers, Kee, Any and Anita, they were overwhelmingly kind and friendly. A million thanks to them! The other ALSA LAOS members are fabulous too! Everyone took time to meet me during the first day although some of them were having classes. I was even brought to visit the National University of Laos.

The highlight of the second day was the Welcoming Dinner. The delegates were from 3 countries, Malaysia, Thailand and Philippines. The welcoming dinner was fun-filled. They started off with the performance of sexy dances, followed by Laos traditional dance and even dances from the delegates’ countries!

The third day was the academic day. If you think it would be boring, you are so wrong! They invited Mr Shegeyuki Ito to give a speech on the topic – “The Protection under The Law for Asylum Seekers and Refugees”. Later on, we were divided into groups to further discuss the protection provided in each country. Although we come from different countries, we managed to communicate well in English! And we even had role play! Great teamwork from my group although that was our first project! We stayed by the Mekong River and the scenery there was breath-taking.

Day four, we spent half of the day visiting That Louang (which is in Vientiane, the city of Laos). That Louang is the most important national monument and symbol of Laos. Besides that, we visited the Patuxai Monument, a victory gate located at the heart of Vientiane whereby many ministries and government offices are located. On top of it, you can see the whole landscape of Vientiane and streets will assemble in the shape of star. We had also visited a few temples such as Hor Pha Keaw and Sisaket Temple, and not forgetting the morning market (Talat Sao).

After having a traditional Laos lunch, we proceeded to Vang Vieng, 4 hours away from Vientiane. Vang Vieng is simply a piece of heaven on earth. It is surrounded by scenic landscape ranging from mountains to rivers, and limestone cliffs to rice fields. We stayed in Vansana Hotel, which gave us a perfect view. Cultural night was finally happening! ALSA members from Laos performed another Laos traditional dance, and also Muay Thai performance from Thailand’s delegates. The gist of this cultural night was the Baci-Soukhouan Ceremony. This ceremony is held only on special occasions. It is a Laos ritual in which blessings are given and received symbolically in white cotton strings tied around our wrists. And not to forget the traditional clothing from different countries!

Day five was the adventure day! It was the most excited day for me as I knew we would be climbing hundreds of stairs and having an adventure in a totally dark cave with only headlights on, and lastly, swimming in the river! As a city girl from Kuala Lumpur, I never had the chance to experience the thrill and excitement of outdoor activities as such.

A steep staircase leads up to the Tham Jang (Jang Cave) entrance. This particular cave was used to defend against attacks from Yunnanese Chinese in the 19th century. Stepping into the cave gave us a welcome break from the heat outside. It is quite wet inside, so shoes with good friction grip are must-wears over here. Don’t bother with a flashlight/ torch in this cave though as it is well-lit by artificial lights placed here and there.

Next, would be the Tham Nam Cave. The way of exploring it? You need to sit in a rubber ring which you are able to move by pulling yourself along a series of ropes tied throughout the caves. Later, we went to the Phu Kham Cave, which contains a reclining Buddha statue as well as the requisite formations normally found in caves. Outside the cave there is a wonderful clear stream, called "Blue Lagoon" by the locals. I did the bravest thing in my life over there, I jumped down from a 5m high tree branch into the river. It was my first try! A lot of tourists did that too with different styles!

The next day we went to a primary school, located on a hill for our charity project. I had mixed feelings when I saw the kids there. I was so sad, because the kids there do not have shoes to wear to go to school. Imagine walking without shoes! Painful isn’t it? There were a lot of stones on the road too. Besides that, they did not have toilet in the school, which means, if they want to go to the toilet, they need to run back to their home to pee. Furthermore, the weather was so cold and they had no jackets. How could they bear with the weather? On the other hand, I was happy because although the children need to go through so many hardships and difficulties, they still choose to go to school and study. Although they did not have good facilities, sufficient teachers, but what was most impressive is that they have the passion. We went to donate pencils, papers, files, clothes and etcetera to the children. I can see from their eyes that they were really grateful for our help. Even the head of the village thanked us for helping and asked us to come again if we have the chance to visit them again. People, how blessed we are to have shoes to wear to school, to have clean uniforms, to have books and pencils?

Last night was the party night – Farewell party “Shine Bright like a Diamond”. The last night is always the killer night. I felt like I have just reached and now I have to leave. A week is really not enough for me to meet with these awesome friends from Laos! This is a wonderful and meaningful study trip and those who missed it, TOO BAD FOR YOU!

ALSA ALWAYS BE ONE! 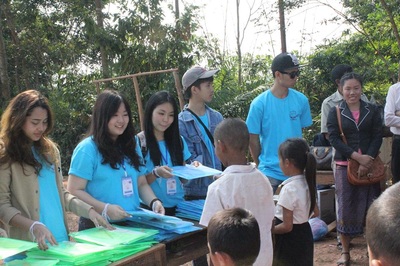 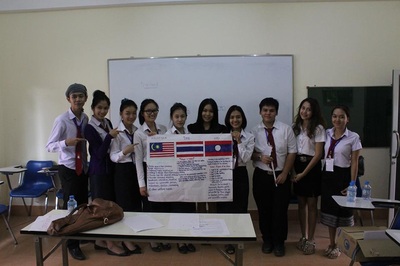 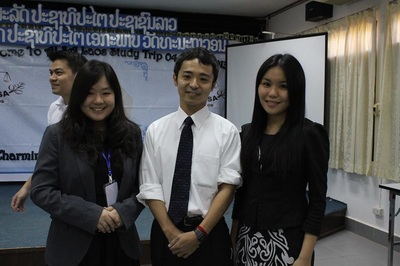 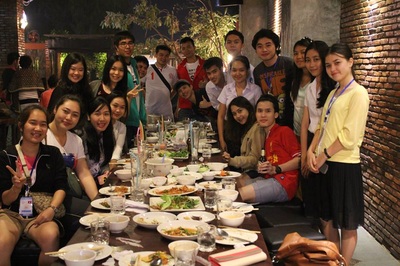 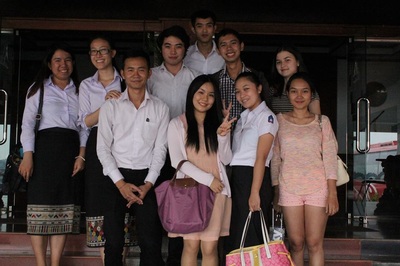 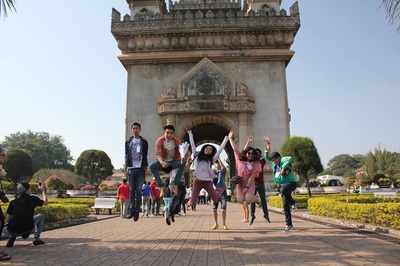 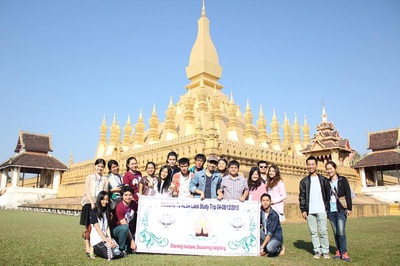 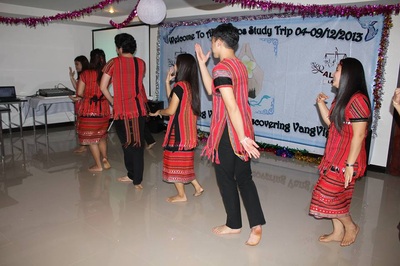 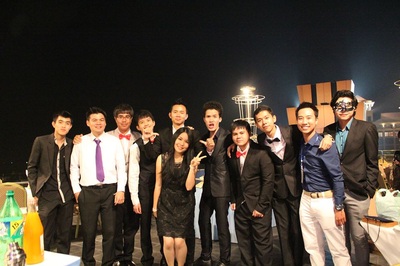 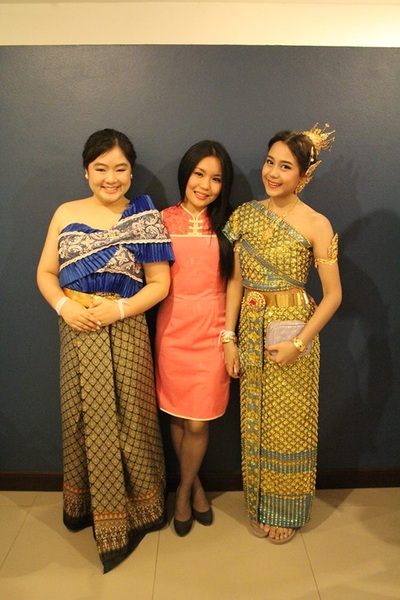 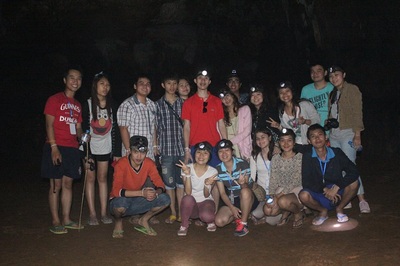 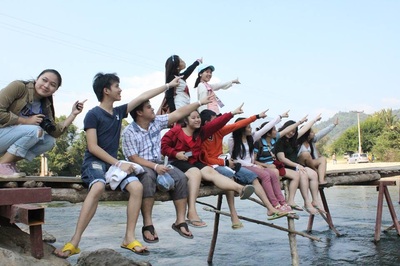 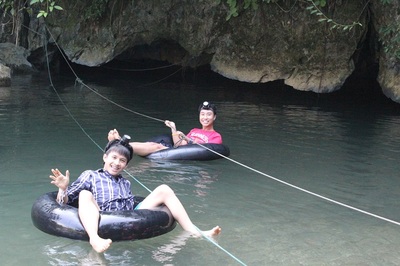 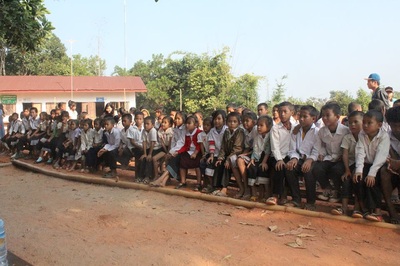