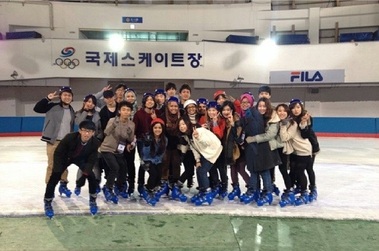 The moment I arrived in South Korea, I froze a little. Frozen by the amazing view as well as the weather. Being a person who does not fancy cold weather, I wonder what was I doing here during winter. But hey, experience is what I am looking for, as it was my second ALSA international event, but my first study trip. Things should be great. I decided not to let the cold weather influence my spirits. I had tons of fun with Malaysian delegates as well as other delegates that I've met during the study trip.

The first agenda was the welcoming party, themed Black and White (to represent the angel and the demon). We arrived at the party just as it's about to start. We rushed to change our attire and went on the bus to the party. Being tired and famished we were fed good food by the organizers :) I was glad. After the crazy subway rides to our hotel in Myeongdong (t-mark hotel), we deserved good food. Or was it just me? :p

I was given Asian Integration and Political Trust Recovery. The table discussion was a lot of fun! Our topics were broken down into 3 categories which were Territorial Disputes, Democracy and Liquidating Past History.

After the table discussion we were brought to Dongdaemun for dinner, shopping and sight-seeing. Later, few of us were brought to Myeondong. It was such a great night walk. They even treated us with these amazing big strawberries. The best part for me was when I went into my first cat cafe in Myeongdong! I had so much fun being a cat lover myself. :)

On 22nd Jan, was the continuation of table discussion and also table rotation as well as role playing. I swear to God I had a blast despite the day being so packed. The role playing by each table discussion's group were epic. Everyone really put a lot of effort into it.   Cultural night was scheduled to be on that date. It is a tradition in any ALSA International events that every delegates from each participating countries has to perform a cultural performance from their country. So we did a combination of Malay and Bollywood dance. With such short amount of time to prepare and practice, we did alright and I'm proud of us. Other countries performed well as well. Overall it was a great night.

The next day (23rd Jan) was the outing trip! We were sorted into a few trip groups which consisted of different delegates of different countries which I thought was a great idea to bond with other participants which were not in our table discussion. The trip commenced by a visit to the National Museum of Korea. We had a mini 'Amazing Race'. And my group (group 5) won! Haha. After that, we had our lunch and headed to the Parliament. I really like the Parliament. Its different than in Malaysia. I find the building to be really beautiful. Then we went to Insadong. Lots of souvenirs can be bought there. I had so much fun with group 5! We were laughing a lot. Or was it just me? We then had our dinner in Hongdae. After the dinner, we (the Malaysian delegates) went for a karaoke session with our caretakers at Prince Edward in Hongdae.

Next morning, we went ice skating! I was scared because I have never ice skated before. I fell off three times. First fall was on my knee. Second fall was on my side. The last fall was a back flip!! It was soo hilarious, I stood up and just laughed it off and start skating again. And in my head, atleast this time I will be ready to ice skate in Sunway Pyramid! Probably show off some ''falling moves'' there! :p Haha. After that, we headed to Hanok Village. It was a pretty amazing view. That evening we had our farewell party. In my mind was, “hey its farewell already?” so fast! The night was great we played games, ate, and exchanged gifts. It was a bittersweet moment.

On 25th January, it was our free time with our caretakers. We can choose to go anywhere we want to. For Malaysian delegates, we divided ourselves into two groups. Both groups went to Myeongdong for shopping. The only difference is that one group went to Namsan Tower, the other group went to a sauna.

On 26th January, was our check out day. All Malaysian delegates except one, extended their stay.

In short, this whole trip has been a memorable one. The Seoul Trip was really fun! I applaud the organizers for the smooth event. Thanks for making our stay comfortable. Thanks for everything. I hope in the near future we will meet again.

ALSA Always Be One!


Proceed to Video Page
Powered by