From 28th June till 4th of July 2013, 16 of the representatives of Alsa Malaysia went on a study trip to Brunei and the discussion was on Women’s Rights in Modern Societies. Throughout this trip, we stayed at the Times Hotel located near the airport and it is the perfect place to accommodate us, as there are two malls within walking distance from the hotel.  On our first night in Brunei, we went to Mangrove Resort where we had our ‘Arabian Night’ dinner. The committees were thoughtful and very creative for a bunch of law students to decorate the place themselves. 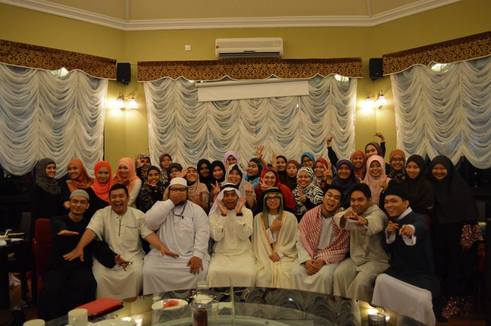 Too excited for our group photo!
On the second day in Brunei, we had our opening ceremony and the table discussions begin. Both of the delegates from Alsa Malaysia and Brunei were divided into four tables of group discussions and each table were given topics on the rights of which to be discussed. For Table 1 the topic was on Islamic woman’s rights and their roles in the society. The issue was, how far are the restrictions to Muslim women so as to safeguard their dignity and honor and thus achieving purity and stability in the society. How equal can the rights and responsibilities of a woman can be that of a man?

Table 2 discusses on women’s rights and domestic violence. Though laws have been enacted to protect the rights of the women on the matter, still many cases were left unreported and thus such rights were not upheld for the victims. The delegated have to identify the consequences of such forfeiture of rights and the steps to be taken to aware the ladies on such importance of upholding their rights and provide solution for the issue.

Table 3 focuses on the rights of a working woman and the issue of inequalities between both genders at workplace. Though it cannot be fully eradicated on the matter of inequality of treatment, the delegates need to suggest the alternatives for such rights of women in workplace to be preserve. Lastly for Table 4 was on how the economic changes affect women’s rights. The issue was, whether the changes in women’s rights correlate with the economic changes. It was a very interesting discussion as the laws enacted on the rights of women on both countries are different, thus the delegates are able to differentiate on the application of the laws, the effectiveness of it and get to know in depth of the legal differences of both countries. 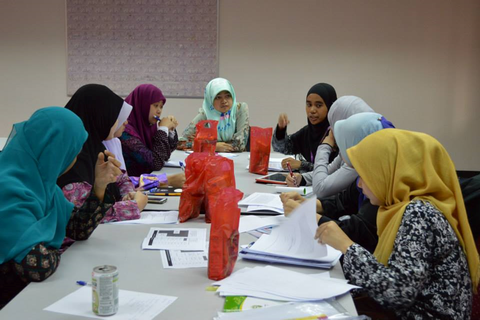 Delegates from Table 4 having a serious discussion.
On day 3 in Brunei, we started our day no knowing what we were going to do, nor the whereabouts of the place we headed. On the schedule the slot was cryptically labeled as ‘Surprise Activity’. We had our mouth open the entire time as soon as we arrived. ALSA Brunei had brought us to the Empire Hotel, a 6 or 7 star hotel which have the best view that faces the South China Sea. The place was enormous and every inch of it is reflects beauty and elegance, needless to say, we spent 2 to 3 hours snapping pictures. We later headed to Pantai Seri Kenangan where we had barbeque for lunch and played some games. It touches our hearts knowing that the committees spent all morning preparing the food for us. They sure can cook!

After that we went to Pasar Malam Gadong for the last activity of the day. We were divided into smaller groups and two caretakers were assigned to each group to show the Bruneian delicacies at the night market. It was odd how the caretakers kept mentioning the name of the food there, which we can’t even pronounce it right, let alone remembers them. It turns out we had a little bit of a ‘Running Man’ assignment after touring the place. Each and every one of us were given 10BND to buy the food listed on a piece of paper that they later gave to us. All of us succeed the challenge and well, the prize was yummy.

On the 4th day in Brunei we had our last table discussions on the morning and on the evening we had our table rotation at D’Anggerek Hotel where all of the groups will have to present the outcome of their discussions to all delegates. Most of the group from the tables tried their best to spice up their performance by adding a little bit of drama into it and they succeeded. Along the way, they managed to present their points clearly to all. 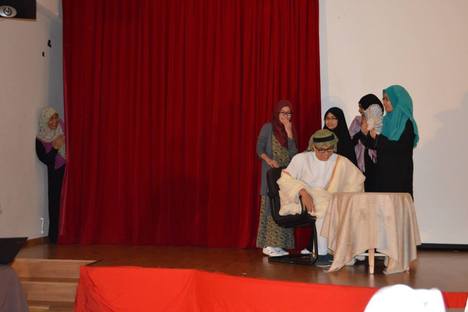 Sheikh, the man with many, many wives!
On our 5th day in Brunei, we had our legal visits to the Attorney General’s Chambers, where  he had a tour around there and met some of the lawyers, the Bruneian graduates from International Islamic University Malaysia doing their practical there, and even had a brief chat with a female lawyer, rushing to the court armed with a thick stack of authorities. We went all the way to snapping pictures around the AGC’s library, which reminds us so very much of the Harry Potter series. We also had the opportunity to enter and sit in the High Court and have the Magistrate and the Registrar explaining the judiciary system of Brunei to us. 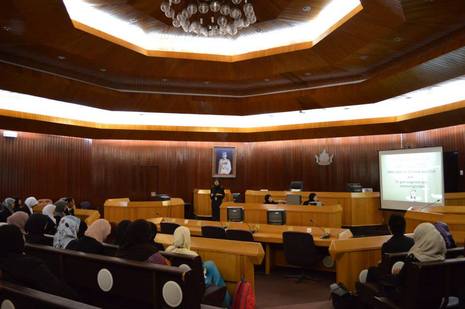 We had many questions in our head, and she was there to answer them all!
After some change of clothes, we went to a must-go place in Brunei, the Museum of Royal Regalia and later, Kampung Ayer. It is named as such because, well it was a village on water, they have schools, fire station, mosque, gas station for boats, all which is necessary for them. We had a 4 to 5 hour boat ride, stopping to visit a museum, a shop where an old uncle is selling old artifacts he found around the place, and had our lunch and dinner on a restaurant in Kampung Ayer, yes it is on the waters too.

We stop at certain places and hear the old folks stories of Brunei, and also a brief visit to Placenta Island, where the people hang their placenta there. They believed that, if the people on land bury their placenta, then they would hang their placenta above the water. Before having our dinner, we went for solat Maghrib at Sultan Omar Ali Saifuddin Mosque. The mosque is considered as one of the most beautiful mosques in the Asia Pacific, so we were lucky to have a chance to pray there and to feast our eyes with such beauty. 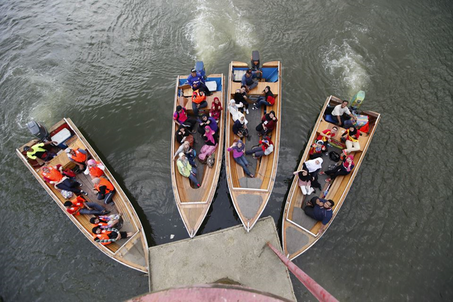 All smiles though being on crocodiles infested waters.
On the 6th day, we had this ‘Amazing Race’ activity at Taman Rekreasi Jalan Menteri Besar and had our nasi lemak there. We later went back to the hotel to change to formal clothing and head over to the Shariah Court.  The officers there had presented and informed us with the sources of the Shariah law referred , the statistics of the Islamic related crimes that had been committed in Brunei for the past 10 years,  and also the steps taken by the judiciary and the country for the preparation to implement hudud law in Brunei. One of the questions asked by the delegates was, whether the shariah and the civil court will work together after the implementation of hudud law. We were told that there will be a special body or division where civil and shariah court will work together.

We later went inside the lower court of Shariah and were given explanations on the judiciary system of Brunei. Then, all of us were free to go anywhere we want with our caretakers who would drive us there. Some went to the malls for more shopping and some decided to take a closer look at the palaces. Later on the evening we had our last dinner together with the ‘ 70’s ‘ theme by the poolside at the Riverview Hotel. ALSA Brunei had wowed us again by decorating up the place, and with the oldies songs playing and plus the red carpet, we certainly had a great time.

The next morning we had a tearful separation with our new found fellow Bruneians friends as they sent us all the way to the security gate at the airport. Over all, it was a wonderful trip, educational and yet we had so much fun going round and visiting places, doing all these activities together. ALSA Brunei had really done a good job at organizing the event, and we are very much thankful for your hospitality and for being our new found friend.

ALSA IIUM for actively representing and bringing up the good name of ALSA Malaysia with you wherever you go. The Brunei Study Trip was only represented by delegates from ALSA IIUM so kudos to them!

Also, kudos to Ms. Sophia Mokhtar of ALSA IIUM who was the Representative for the Brunei Study Trip for preparing this wonderful report.

ALSA Always Be One